Posted on September 7, 2010 by stevengoddard 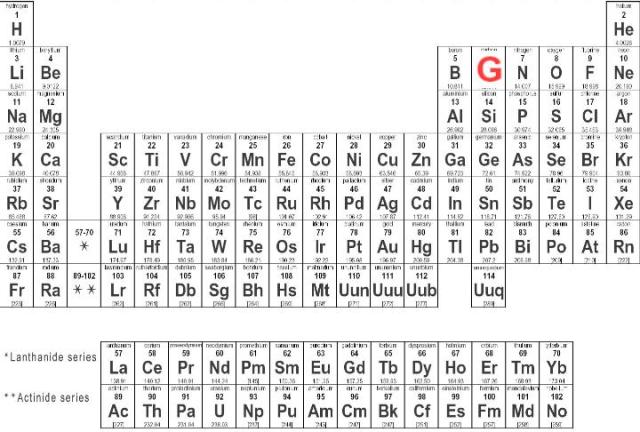 Element number 6 has been unofficially renamed from C to G. People now use the words “Carbon” and “Global warming” interchangeably, so it makes sense.

You can see the effects of global warming in a new high-resolution map that shows carbon locked up in tropical forest vegetation and emitted by land-use practices in Peru’s Amazon. The maps were created with satellite mapping, airborne-laser technology, and ground-based plot surveys. And the images may help pave the way for a new United Nations monitoring system to curb deforestation and forest degradation.

But such a monitoring program needs accurate, high-resolution methods to keep track of the carbon. Scientists say the map, from the study of an area the size of Switzerland, is the breakthrough that could make REDD work. Although critics say the program has more problems than an accurate monitoring system.

The map is from a project by the Carnegie Institution’s Department of Global Ecology, in cooperation with the World Wildlife Fund and the Peruvian Ministry of the Environment.

“What we’re showing here for the first time is an ability to not only map the carbon … that is in the forest, but also use a technique that allows us to estimate the emissions,” Greg Asner, lead author of a study that produced the map, tells Reuters.
“In terms of an international climate treaty, that’s the big one.”

The article doesn’t mention anything about “the effects of global warming.” Rather it is a land use map. Not only does the article confuse carbon with global warming, but it also seems unable to distinguish between alleged cause and effect.

5 Responses to The New Periodic Table