Posted on September 23, 2010 by stevengoddard 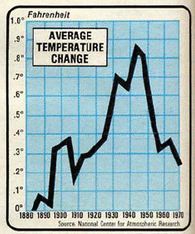 Our friends didn’t like the fact that temperatures cooled dramatically when they were supposed to be rising (due to the carbon sins of mankind.) So they found a way to blame that on people too. For a while ….

Pollution not to blame for rapid ocean cooling, says Phil Jones paper
Research from UEA finds drop in temperature is too quick to be caused by the build-up of sulphur aerosols from fossil fuels

Quite a revelation that the climate has natural cycles, which are not controlled by man. The good news for the hockey team groupies is that they don’t have to keep denying that the ice age scare occurred – because Phil Jones has now confirmed the basis.

And John Holdren wrote a book about it at the time, in which he of course came to the wrong conclusion. 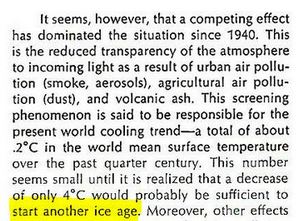 The next big step for the hockey team will be to admit that the rapid warming from 1880 to 1945 could not have been caused by CO2.

4 Responses to Another Global Warming Fable Bites The Dust