NASA At The Halfway Mark

Posted on September 30, 2010 by stevengoddard 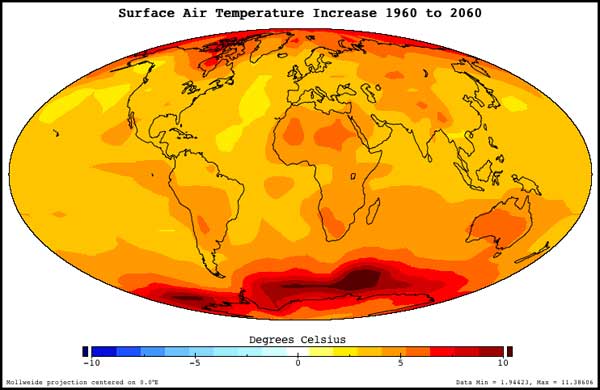 In a fine propaganda piece specifically directed at young impressionable minds, NASA released the forecast above – which predicts regions near Antarctica warming up 10ºC from 1960-2060.

We are at the halfway point now in 2010. Let’s see how they are doing.

So far, the forecast +10ºC hot spot east of the Antarctic Peninsula has not warmed at all. In fact, their red hot southern hemisphere has barely warmed anywhere. View from the South Pole is shown below :

Likewise, the northern hemisphere has warmed much more slowly than their 2-8ºC forecast. Barely half a degree from 1960-2009.

The NASA forecast is showing every sign of being a total bust. The impact of each new molecule of CO2 on the Earth’s radiation budget decrease logarithmically as concentration increases. So why don’t they take the article down, explain to the children that they got it wrong, and that they are very sorry for scaring them needlessly.

10 Responses to NASA At The Halfway Mark