Joe Romm dependably took the bait, and produced the graph below – which shows that sea level is rising at a rate of 12 inches per century – with a drop since the start of 2010. Of course he didn’t bother to put any units (should be mm) on the graph, because he correctly assumes that his normal audience isn’t very bright.

But wait a minute! Joe has been telling us that it is the hottest year ever, and that the Greenland and Antarctic ice sheets are melting like crazy. Shouldn’t sea level be rising much, much faster? After all, Hansen is forecasting 3-6 metres (10-20 feet) of rise this century. 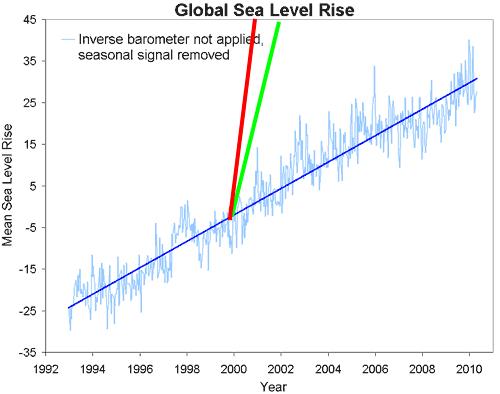 Hansen’s numbers are 10-20X too high, but that doesn’t seem to bug Joe at all. Pretty ridiculous, but standard Romm fare.

Over the last five years sea level rise rates have fallen 30%. Proving beyond a shadow of a doubt that ice sheet melt has not accelerated.

If sea level was actually rising at the rate Hansen claimed, the world would be in chaos and the highway near his Manhattan office building would be flooded. That is not the kind of thing that would go unnoticed.

Under BAU [business as usual] forcing in the 21st century, the sea level rise surely will be dominated by a third term: (3) ice sheet disintegration. This third term was small until the past few years, but it is has at least doubled in the past decade and is now close to 1 mm/year, based on the gravity satellite measurements discussed above. As a quantitative example, let us say that the ice sheet contribution is 1 cm for the decade 2005–15 and that it doubles each decade until the West Antarctic ice sheet is largely depleted. That time constant yields a sea level rise of the order of 5 m this century. Of course I cannot prove that my choice of a ten-year doubling time for nonlinear response is accurate, but I am confident that it provides a far better estimate than a linear response for the ice sheet component of sea level rise under BAU forcing.

The West Side Highway [which runs along the Hudson River] will be under water. And there will be tape across the windows across the street because of high winds. And the same birds won’t be there. The trees in the median strip will change.” Then he said, “There will be more police cars.” Why? “Well, you know what happens to crime when the heat goes up.”

Just having fun
View all posts by stevengoddard →
This entry was posted in Hansen, Romm. Bookmark the permalink.