Birthday Party At The North Pole 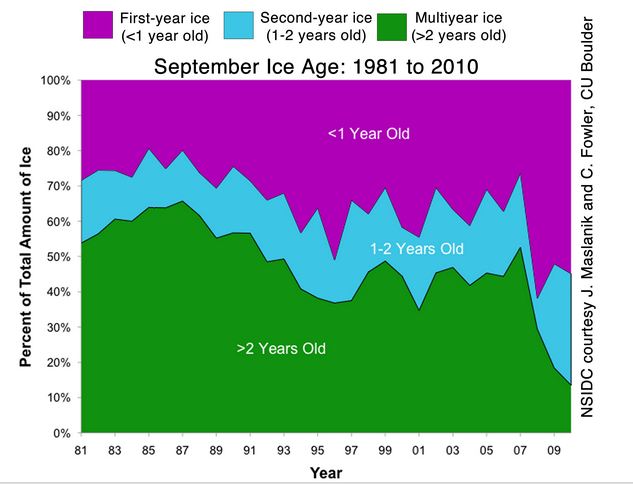 Ice in the Arctic Ocean is born in October. So all that turquoise ice in the NSIDC graph above is now green (except for the little bit which has been transported out of the Arctic in the last two weeks.) In other words, the area of multiyear (MYI) ice is now just below 1995.

The animation below shows the party at the pole.

The image below shows ages after the party (ignoring new ice which has formed in the last few weeks.)

Over the winter the area of MYI ice will decline. This is because some ice will get blown from west to east out of the Arctic where it will melt. During the winter of 2007-2008, a lot of MYI was lost.

The key to survival is the wind, and it would be nice if NSIDC did updates of these very helpful age maps every few months.

The image below shows the aging of the ice in Autumn 2005.

Just having fun
View all posts by stevengoddard →
This entry was posted in Arctic. Bookmark the permalink.

20 Responses to Birthday Party At The North Pole