Posted on November 24, 2010 by stevengoddard

Peter Sinclair reels off one piece of misinformation after another in his monotone voice. Here are a couple of them.

Around time 4:40 he compares ice loss in the Arctic vs. ice gain in the Antarctic using percentages rather than absolute numbers. Perhaps he doesn’t realize that there is a lot more sea ice in the Antarctic, so the percentages are of course lower? When we measure the absolute extent of Arctic loss (red below) vs Antarctic gain (blue below) we see that they are currently about equal. 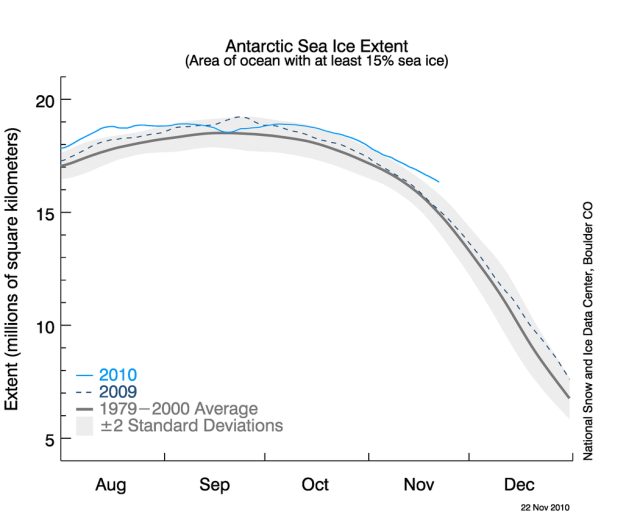 The Antarctic is three standard deviations above normal, and solar energy is at its peak – as seen in the green circle below. By contrast, the Arctic peak ice loss occurs in September when there is very little solar energy being received (red circle below.)

2010 ice took its dip starting in early September, when the Sun was very low in the sky (red circle above) so it actually acts as a negative feedback. The open water allows LW radiation to escape from the ocean, with minimal SW warming the water that time of year.

At another point he claims that the Arctic is in a “death spiral” in spite of the fact that the minimum has increased by 20% over the last three years.