Posted on November 27, 2010 by stevengoddard

1988 was a very good year for James Hansen. He testified before Congress with the air conditioning sabotaged by Tim Wirth. He forecast that Manhattan would be drowning by now.  And he forecast 5°C warming by 2040 in an interview he gave for the CBC’s “Survival” program, reported on page nine of Suzuki’s book. 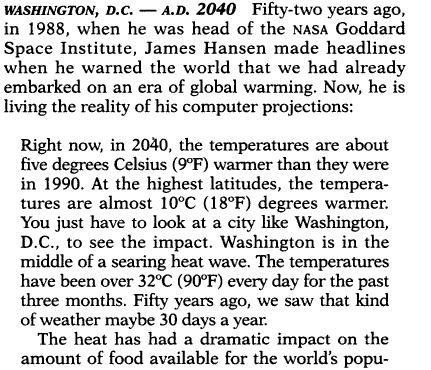 We are almost at the halfway mark in 2010, and temperatures have been flat for a decade.

No wonder Hansen is working so hard to squeeze every hundredth of a degree of extra warming out of the temperature record. He can’t admit he was wrong, and apparently prefers to take the whole world down with him.