No Hurricanes Have Hit The US For 843 Days, But The Hurricanes We Aren’t Having Would Have Been Very Destructive

Posted on January 5, 2011 by stevengoddard 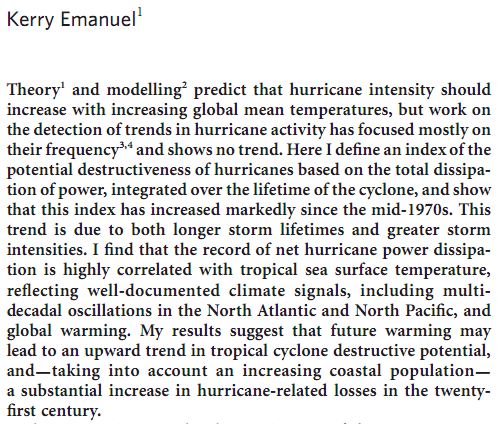 Theory
1
and modelling
2
predict that hurricane intensity should
increase with increasing global mean temperatures, but work on
the detection of trends in hurricane activity has focusedmostly on
their frequency
3,4
and shows no trend.Here I deﬁne an index of the
potential destructiveness of hurricanes based on the total dissipation of power, integrated over the lifetime of the cyclone, and show
that this index has increased markedly since the mid-1970s. This
trend is due to both longer storm lifetimes and greater storm
intensities. I ﬁnd that the record of net hurricane power dissipation is highly correlated with tropical sea surface temperature,
reﬂecting well-documented climate signals, including multidecadal oscillations in the North Atlantic and North Paciﬁc, and
global warming. My results suggest that future warming may
lead to an upward trend in tropical cyclone destructive potential,
and—taking into account an increasing coastal population—
a substantial increase in hurricane-related losses in the twenty-
ﬁrst century

47 Responses to No Hurricanes Have Hit The US For 843 Days, But The Hurricanes We Aren’t Having Would Have Been Very Destructive