Hansen : It Is Your Eyes That Are Lying, Not Me

Hansen says that he was right, your eyes are lying, and the world really is heating out of control. For some reason though, he forgot to include the actual temperature graph.

Hansen’s graph above shows what he claims has happened with emissions – a straight line. But the Mauna Loa CO2 graph below shows that CO2 has actually increased exponentially since 1960.

The graph below shows the Mauna Loa data plotted in green on top of Hansen’s graph – exactly following scenario A.

Now lets look at what has actually happened with temperatures since 1960. 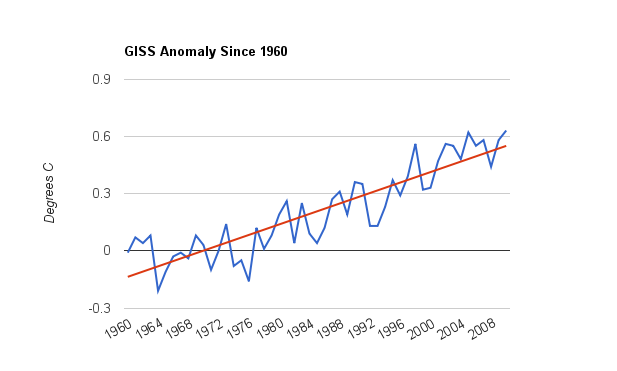 Conclusion : Hansen is wrong about both greenhouse gas growth and temperature change – even using his own bloated temperature numbers. Climate sensitivity is much lower than he projected. It is time for him to come clean about this.

32 Responses to Hansen : It Is Your Eyes That Are Lying, Not Me