Thing Of The Past : “too much snow in the Rockies” 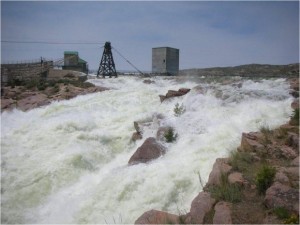 It’s rare to see millions of gallons of water spilling out of a reservoir, especially in the West, where water is more precious than gold.

But the water was spilling from Pathfinder Reservoir, 45 miles southwest of Casper, Wyo., in June, because it couldn’t hold any more water.

The last time that happened was in 1984.

The U.S. Bureau of Reclamation, which controls nine reservoirs in the North Platte River Basin, predicts it will happen again this summer.

The reason: too much snow in the Rockies. When it melts in late spring and early summer, reservoirs will be bursting at the seams.

“Wyoming is loaded with water. They have a lot of snowpack,” said Cory Steinke, civil engineer with the Central Nebraska Public Power and Irrigation District based in Holdrege.

7 Responses to Thing Of The Past : “too much snow in the Rockies”