Too Much Medical Marijuana In Boulder 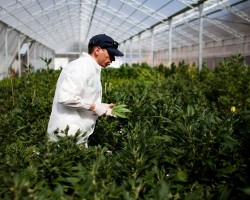 To those of us living in Boulder and surrounding communities, it may come as a surprise that many people remain unconvinced that the use of fossil fuels is the main contributor to current climate change

An example of what happens when such concentrations are too high can be seen by looking at our planetary neighbor, Venus: the Venusian atmosphere is more than 96 percent carbon dioxide (compared to 0.038 percent on Earth), and the temperature can reach 460 C, which is hotter than your oven can get. On the other hand, the planet Mars has a very thin atmosphere is quite cold at -63 degrees C (-81 F). Venus, Earth and Mars are often referred to as the “Goldilocks” planets. Venus is the porridge that is too hot, Mars is porridge that is too cold and Earth is just right.

That is what smoking the whacky weed will do for you. Mars has 95% CO2, and the partial pressure of CO2 in Mars atmosphere is about an order of magnitude larger than on Earth. Yet temperatures are extremely cold on Mars. How did the Boulder author miss that part?

23 Responses to Too Much Medical Marijuana In Boulder