Obama Brags About His Unemployment Record With A Fraudulent Graph

The real story of unemployment is that when Barry, Nancy and Harry took over Washington in 2007, the economy tanked.

(CNN) — Democrats promised Wednesday to lead the country in a new direction after winning control of the House for the first time in 12 years in midterm elections.

By early Wednesday, Democrats had picked up at least 29 seats; they needed 15 to capture a majority in the House. Two Democratic seats in Georgia that were targeted by Republicans remained too close to call.

Rep. Nancy Pelosi, D-California, is now poised to become the first female speaker of the House.

Pelosi promised to lead the nation in a new direction “in partnership, not in partisanship.”

Michelle likes living high off the hog at taxpayer expense, so Barry doesn’t want anyone to remember the damage he has done – and has put a new fraudulent graph out. 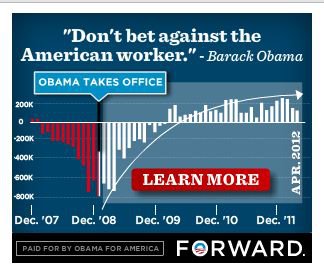 Besides failing to take responsibility for the disaster him and his fellow dems created, he pulled some tricks in creating the graph.

The Obama campaign has been running the ad all over the internet. When I saw it, something about it caught my eye.

What the Obama campaign has done – in a very subtle way – is to visually and fraudulently inflate their job creation record by a third.

And they thought we were too stupid to notice.