100 Degree Days On The Decline In Oklahoma 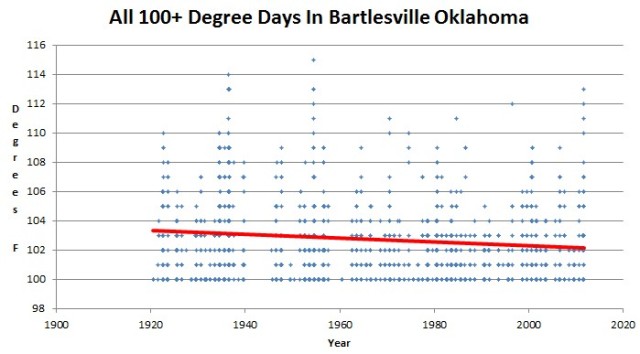 1934 brought sixty-one days over one hundred degrees to Oklahoma City, compared to just thirty-eight days in 2011. NOAA says that the Oklahoma summer of 2011 was the hottest on record in the US, because some people there feel the need to lie about climate – to keep their funding going.

“The Midwest and the upper Midwest were the epicenters for this vast warmth,” Deke Arndt of NOAA’s Climatic Data Center said in an online video. That meant farming started earlier in the year, and so did pests and weeds, bringing higher costs earlier in the growing season, Arndt said.

“This warmth is an example of what we would expect to see more often in a warming world,”

Deke apparently isn’t confident of his own opinion, so he invokes the imaginary authoritative plural. Perhaps the mouse in his pocket agrees.

2 Responses to 100 Degree Days On The Decline In Oklahoma