Desperate Scientists Getting Bolder And Bolder With Their Lies

This story is incredible. Scientists funded by NSF are directly contradicting all of the available data. There is no plausible explanation other than dishonesty.

As the world continues to warm from climate change, most of California — including San Francisco Bay and Monterey Bay — will see a greater rise in sea level than other parts of the planet, according to a prominent national study released Friday.

California has shown little or no change in sea level for decades. It is one of the most stable places on the planet.

The report, from the National Academy of Sciences, found that the impacts of melting ice and warming, expanding oceans will hit California harder because most of the state’s coast line is slowly sinking due to geological forces. Ocean levels south of Humboldt County will rise up to 1 foot in the next 20 years, 2 feet by 2050, and up to 5 feet by 2100, the study showed.

San Francisco Bay already has risen roughly 7 inches in the past 100 years, as measured by the tidal gauge at Fort Point, under the Golden Gate Bridge.

All of that seven inches occurred prior to 1980. Since 1980, there has been zero sea level rise measured at the Fort Point tide gauge. See the graph below.

“We shouldn’t be debating this any more,” said Gary Griggs, a coastal geologist at UC Santa Cruz who served on the committee that issued the 274-page report. “Let’s start thinking realistically about the future, and plan so we minimize our losses.”

The thing we should be discussing is how to purge the scientific community of junk science.

At risk over the next generation: low-lying areas such as San Francisco and Oakland airports, Treasure Island, Alviso in San Jose and low-lying communities such as Foster City and Redwood Shores, particularly during winter storms at high tide.

Tide gauges and satellite measurements along the California coast show that sea level has either not changed, or has gone down over the last twenty years. Claims of rapid sea level rise over the next twenty years are fraudulent.

Sea level to rise higher in California due to global warming, geology – MontereyHerald.com :

The graph below shows the tide gauge data discussed in the article. The trend is dead flat for thirty years, and they are claiming 300 mm of rise in the next twenty years. 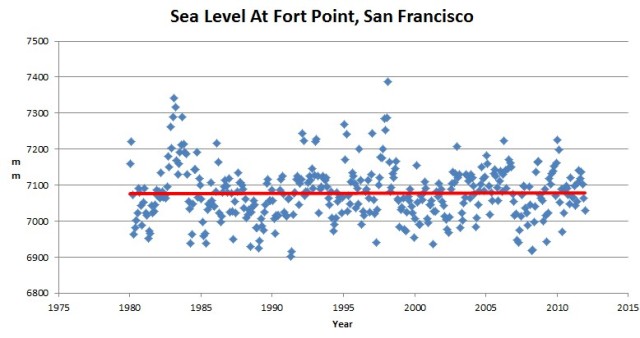 Satellite measurements show no change in sea level along the California coast since the start of records in 1992. These so called scientists are engaging in fraud, and should be held to task for it.

No place along the California coast shows any change in sea level since the start of satellite records in 1992.

There is no reason to expect any sea level rise in California over the next 20 years, much less the large numbers being claimed in this study. We are dealing with a bunch of blatant fraudsters.