June 2012 – Leading Alarmists Declare That Global Warming Is Over

Leading alarmist John Cook told us this week that temperatures have been nearly flat for 15 years,  are below Hansen’s zero emissions scenario, and that it is because we have already cut our emissions of the most potent greenhouse gases (CFCx, CH4 and N2O) by 80-90% below what was forecast.

John provided this graph showing that temperatures have risen very little for 15 years, and are below Hansen’s “zero emissions after the year 2000” Scenario C. 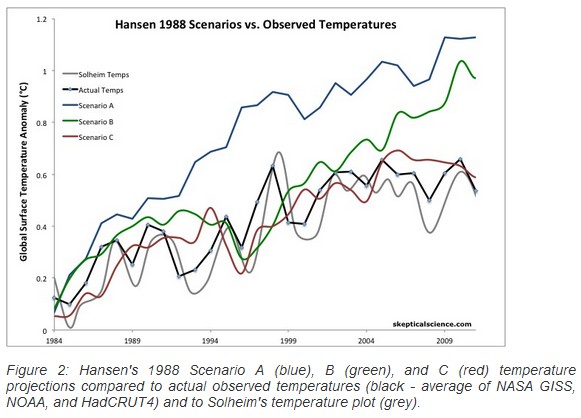 The father of GAIA, James Lovelock also told us this week that his forecasts of global warming doom were misguided.

If alarmists are telling us that we have already made huge cuts in emissions, that temperatures are barely rising, and that they were wrong all along – what is it that they are worrying about?

Time to pack this $100 billion/year scam up and figure out why some of the key players continue to lie about it.