James Hansen Demonstrates Again That He Is Completely Incompetent

An important change is the emergence of a category of summertime extremely hot outliers, more than three standard deviations (σ) warmer than climatology.

This hot extreme, which covered much less than 1% of Earth’s surface in the period of climatology, now typicallycovers about 10% of the land area.

We conclude that extreme heat waves, such as that in Texas and Oklahoma in 2011 and Moscow in 2010, were “caused” by global warming, because their likelihood was negligible prior to the recent rapid global warming. We discuss practical implications of this substantial, growing climate change.

US Politics | AMERICAblog News: Quarter to half of species on earth may die from global warming

This is nonsense and a disgrace to both NASA and science in general. According to the EPA graph below, the heatwaves of the 1930s were more than three standard deviations warmer than climatology.

Heat waves occurred with high frequency in the 1930s, and these remain the most severe heat waves in the U.S. historical record  (see Figure 1). Many years of intense drought (the “Dust Bowl”) contributed to these heat waves by depleting soil moisture and reducing the moderating effects of evaporation.

• There is no clear trend over the entire period tracked by the index. Although it is hard to see in Figure 1 (because of the extreme events of the 1930s), heat wave frequency decreased in the 1960s and 1970s but has risen since then (see Figure 1). 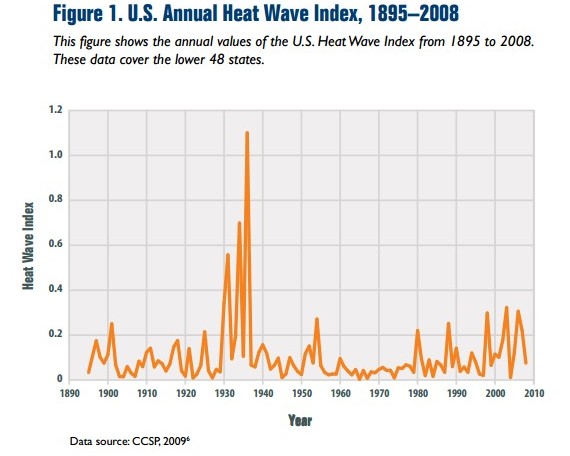 According to the USHCN database, maximum temperatures in Oklahoma during the summers of 1936 and 1934 were both warmer than 2011, and 1954 was just as hot

Hansen needs to step down. He is attempting to drive policy with claims that have no basis in fact. This is not acceptable, and he has been doing it for decades.