WHITEHORSE, Yukon Territory – In February 1942, President Franklin D. Roosevelt gave the Army Corps of Engineers an assignment: Build a road from British Columbia across the Yukon to Alaska – in eight months, before winter sets in.

Japan had just destroyed much of the Pacific fleet at Pearl Harbor. Alaska was vulnerable to invasion (in fact, the Japanese occupied two Aleutian Islands that June). If Americans did not build a supply road linking Alaska to the heart of North America, the thinking went, invading Japanese would do it for them.

But prospects for success were poor. The road would traverse 1,500 miles of mountainous subarctic terrain, most of it unsettled, heavily forested and unmapped. Engineers would face fierce cold, fierce heat, vicious insects, and vast stretches of permafrost and boggy terrain called muskeg that swallowed bulldozers whole.

Nevertheless, the Alaska Canada Military Highway was declared open the following October. Nicknamed the Alcan, this so-called pioneer road was little more than a gravel lane passable only by military trucks. Still, people called it the 20th century’s greatest engineering feat, after only the Panama Canal.

Today, as the road now known as the Alaska Highway celebrates its 70th birthday, cars and trucks flash along what Wally Hidinger calls “a very good standard two-lane highway” from Dawson Creek, British Columbia, to Fairbanks, Alaska. “Our mantra is bare, dry pavement 365 days a year,” said Mr. Hidinger, who directs transportation engineering for the Yukon territorial government. It is a vow he and his staff can keep.

They rely on remote sensing technology to anticipate bad weather and keep the pavement clear. They work to unkink twists and turns left over from the original construction, when the builders dealt with muskeg and other obstacles by curving the road around them.

But today the Alcan faces challenges that could not have been predicted when it was built. By far the biggest is permafrost, the permanently frozen ground that underlies much of the road.

As the climate warms, stretches of permafrost are no longer permanent. They are melting – leaving pavement with cracks, turning asphalt into washboard and otherwise threatening the stability of the road.

Alaska is having one of their coldest summers on record, you silly New York Times reporter person. If you put asphalt on permafrost, it will melt.

In 1954, Canada had to relocate their largest Arctic community due to melting permafrost. Pretending that melting permafrost is something new is typical of the crap reporting we have come to expect from the New York Times. Cornelia Dean appears to be a propagandist rather than an actual reporter. 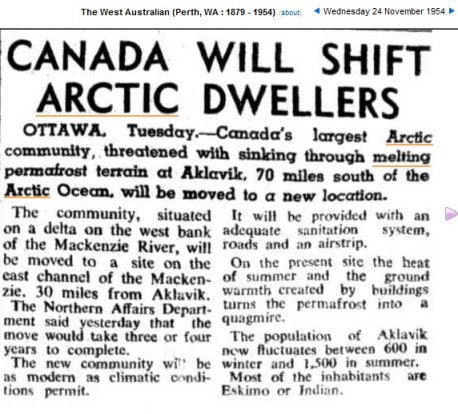