NASA chief cryospheric scientist H. Jay Zwally told FoxNews.com that the melting has been increasing as the temperatures in Greenland have been increasing.

“Climate in the Arctic has been warming about three to four times more than the global average, and Greenland surface temperatures (observed by satellite and surface instruments) have been increasing about 2 degrees Celsius per decade during about the last 20 years,” he said.

Why did he pick the last 20 years?  Because twenty years ago was the coldest period on record in Greenland. 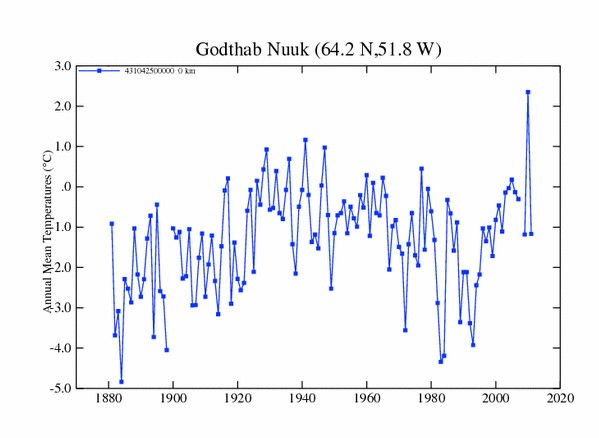 Top scientist Zwally forgot to mention that current temperatures are cooler than the 1930s and that the long term trend since the 1920s is downward.

This week, after reviewing his own new data, NASA climate scientist Jay Zwally said: “At this rate, the Arctic Ocean could be nearly ice-free at the end of summer by 2012, much faster than previous predictions.”