A Tale Of Two Countries

Posted on November 24, 2012 by stevengoddard

It was the best of engineers. It was the worst of scientists.

In the year 1900, Galveston Texas was hit by a 145 MPH hurricane and storm surge which wiped out most of the city and killed 10,000 people. 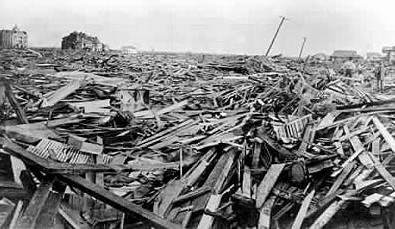 How did they deal with it?

The city was flooded repeatedly down through the 19th century. In 1886 a commission talked about building a wall against the sea, but they rejected the idea. It would cost too much. Now Galveston had seen just how bad a hurricane could be. Citizens knew they’d have to either give up their city or protect it.

So by a ratio of 150 to 1 the people who could vote decided to undertake a wild engineering scheme. They would build a great dam, a Sea Wall along the south Gulf coast. It’d be 17 feet high and 3 miles long with a skirt of protective granite rip-rap. But the Sea Wall was a piece of cake compared to what followed. Next they raised the whole city. And this was the major city in Texas.

They slanted the ground so water that got over the Sea Wall could run off toward the bay on the north. That meant raising the ground almost to the lip of the Wall. Then they sloped it downward to eight feet above sea level on the north.

To do that, they cut a canal into the city and began pumping in a slurry of sand and salt water. The water ran off and left sand behind. Homeowners had to lift their houses up on stilts so the slurry could fill in under them.

It took 300 jacks to lift the big brick Moody mansion. It took 700 jacks to lift St. Patrick’s church. Of course there was a component of brutality in all that. Some homeowners couldn’t afford the raising. Some had to sacrifice the bottom floor of their houses. Some had to abandon their homes entirely.

The work went on in sections for seven years. In 1915 the new city they’d built suffered its first test. A storm every bit as bad as the 1900 hurricane hit Galveston and caused only eight deaths. Since then they’ve extended the Wall and filled in more land. No one at all died in hurricanes Carla and Alicia.

And, today, the very presence of Galveston is one of the great joys of living in Texas. 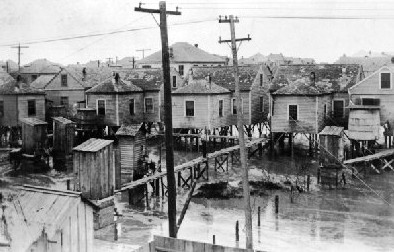 In the year 2011, Staten Island and Long Island were hit by a storm surge from a tropical storm with 60 MPH winds.

How did they deal with it? The mayor of New York published a special edition of his newspaper demanding that we reduce CO2 emissions. This was based on the testimony of the world’s leading climate scientists.

In 1915, Galveston was hit by another major hurricane – and suffered only eight dead. 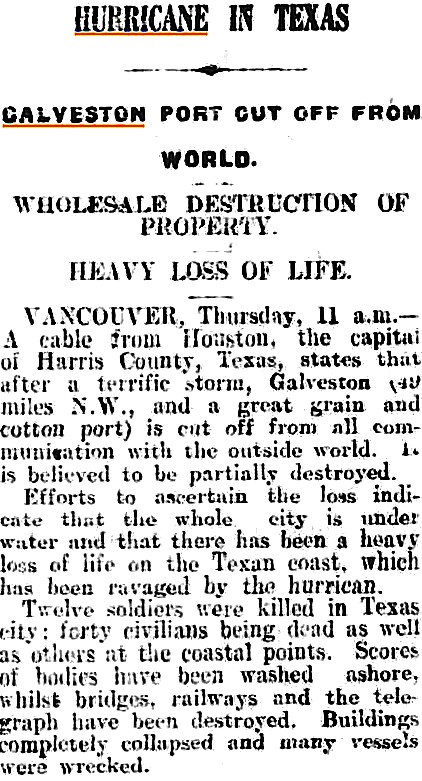 Galveston survived because they listened to practical, smart engineers. Had Galveston instead listened to scientists like James Hansen and Michael Mann, they wouldn’t be here today. Hurricane Ike in 2008 would have destroyed the city without the engineering done over 100 years ago.

h/t to David Appell, for reminding us just how clueless the climate science community is.

23 Responses to A Tale Of Two Countries