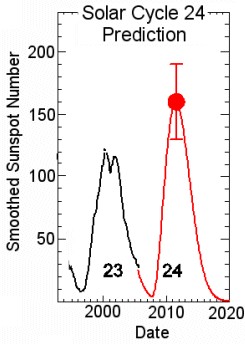 Evidence is mounting: the next solar cycle is going to be a big one. Solar cycle 24, due to peak in 2010 or 2011 “looks like its going to be one of the most intense cycles since record-keeping began almost 400 years ago,” says solar physicist David Hathaway of the Marshall Space Flight Center. He and colleague Robert Wilson presented this conclusion last week at the American Geophysical Union meeting in San Francisco.

Missed by a factor of two or three.