NSIDC : Arctic Was Ice Free In The Past

Posted on March 8, 2013 by stevengoddard

The current Greenland warming, while not yet quite matching the temperatures of 70 years ago …..

“Examination of several proxy records (e.g., sediment cores) of sea ice indicate ice-free or near ice-free summer conditions for at least some time during the period of 15,000 to 5,000 years ago”

In 1940, Greenland was approaching a catastrophe.

By far the largest number of local glaciers in north-east Greenland had receded very greatly during recent decades, and it would not be exaggerating to say that these glaciers were nearing a catastrophe.

In 1922, Arctic melt had made it unrecognizable 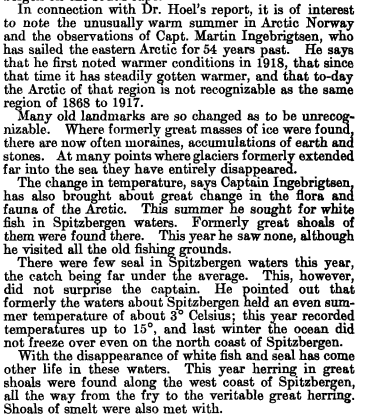 In 1911, glaciers were disappearing

As you enter Glacier Bay in Southeast Alaska you will cruise along shorelines completely covered by ice just 200 years ago.

Explorer Captain George Vancouver found Icy Strait choked with ice in 1794, and Glacier Bay was barely an indented glacier. That glacier was more than 4000 ft. thick, up to 20 miles or more wide, and extended more than 100 miles to the St.Elias Range of mountains.

By 1879 naturist John Muir found that the ice had retreated 48 miles up the bay. By 1916 the Grand Pacific Glacier headed Tarr inlet 65 miles from Glacier Bay’s mouth.

6 Responses to NSIDC : Arctic Was Ice Free In The Past