NOAA : Hiding The Decline In US Temperatures

NOAA’s measured temperature data shows April has been cooling in the US since 1930. 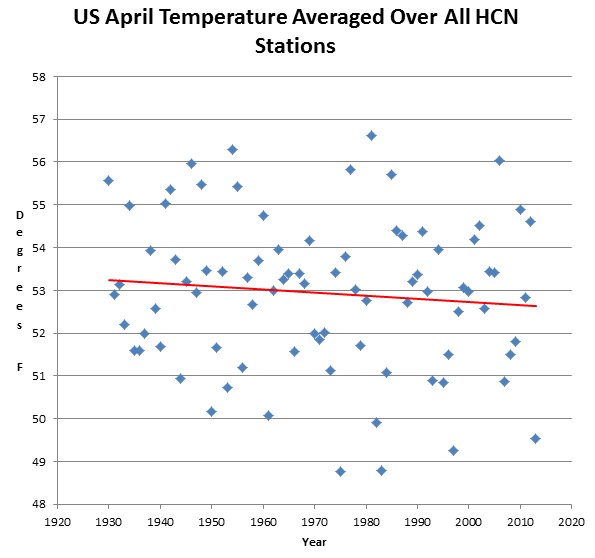 Note that there are no warnings or disclaimers on that web page indicating that they have reversed the trend by altering the data.

The graph below shows the difference the raw and tampered data. They have progressively adjusted older temperatures downwards, which creates a non-existent warming trend.

Until about ten years ago, NASA, NOAA and CRU all acknowledged that there has been no warming in the US. But that was before they started tampering with the data.

Last week, scientists from the United States Commerce Department’s National Oceanic and Atmospheric Administration said that a study of temperature readings for the contiguous 48 states over the last century showed there had been no significant change in average temperature over that period. Dr. (Phil) Jones said in a telephone interview today that his own results for the 48 states agreed with those findings.

The animation below shows how NOAA is now cooling the past – to create the impression of a non-existent warming trend.

21 Responses to NOAA : Hiding The Decline In US Temperatures