Posted on November 11, 2013 by stevengoddard 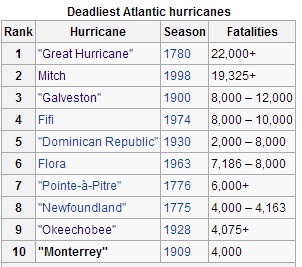 The tenth deadliest Atlantic hurricane occurred during 1909, which NASA says was the coldest on record. The only hurricane on that list which came during a warm year was Mitch in 1998.

Climate morons claim that global warming makes hurricanes worse, but the data says that is nonsense.