Posted on November 16, 2013 by stevengoddard

In 1988, the world’s greatest climatologist published these three possible forecasts for future temperatures. 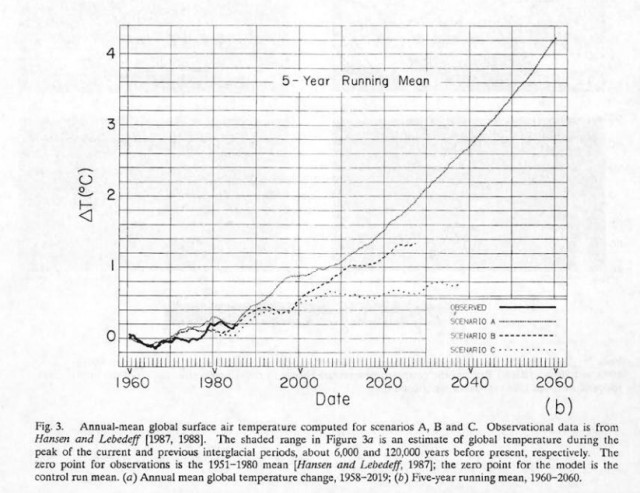 Scenario A assumes continued exponential trace gas growth, scenario B assumes a reduced linear growth of trace gases, and scenario C assumes a rapid curtailment of trace gas emissions such that the net climate forcing ceases to increase after the year 2000.

The highest forecast, scenario A was Hansen’s expected “business as usual” forecast, as documented in this 1989 publication. 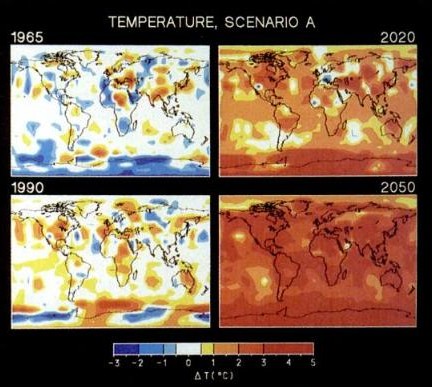 So how did Hansen’s forecasts fare? NASA five year mean temperatures are plotted in green on top of the 1988 graph below. They are tracking scenario C, which was based on zero emissions this century.

In other words, the 10% increase in atmospheric CO2 since 2000 has had no effect on the temperature, and warming since 1988 has been less than one-third of what Hansen forecast in his business as usual scenario. 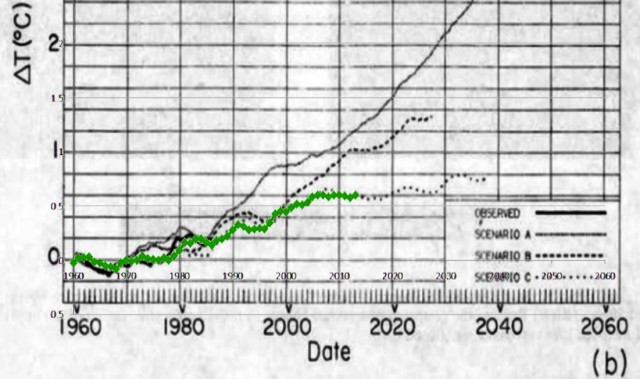 But it is worse than it seems. Until the most recent data tampering, temperatures were below scenario C. The animation below flashes between January 2012 NASA data, and the current NASA data. They are constantly tampering with the data to bump up the feeble warming which has occurred.

But it is even worse than that. Hansen published his most conservative “scientific” forecasts. He was telling the press much higher numbers at the time.

Dr. James E. Hansen of the Goddard Space Flight Center’s Institute for Space Studies said research by his institute showed that because of the “greenhouse effect” that results when gases prevent heat from escaping the earth’s atmosphere, global temperatures would rise early in the next century to “well above any level experienced in the past 100,000 years.”

In summary, the entire global warming story is a total failure – complete with failed forecasts, data tampering and wild exaggerations from the leading government scientist.