Posted on September 15, 2014 by stevengoddard

[CORRECTION the graph at the bottom is incorrect. I was looking at the HUFF Post map, which showed warming since 1880, not temperature anomaly.]

I speculated a few months ago that NASA and NOAA have been instructed to make 2014 the hottest year ever, and it is becoming apparent that I was correct. After a big cool down in August, NASA has declared it to be the “hottest August ever.”.

This past August was the warmest since records began in 1881, according to new data released by NASA. The latest readings continue a series of record or near-record breaking months. May of this year was also the warmest in recorded history.

Dr. Gavin Schmidt, a climatologist and climate modeler at NASA’s Goddard Institute for Space Studies, told The Huffington Post that while the agency’s data does indicate that this August was the hottest on record, the difference falls within a few hundredths of a degree compared with previous Augusts.

The Planet Just Had Its Warmest August On Record

In fact it was the sixth coolest August since 1997, and below the declining trend line. 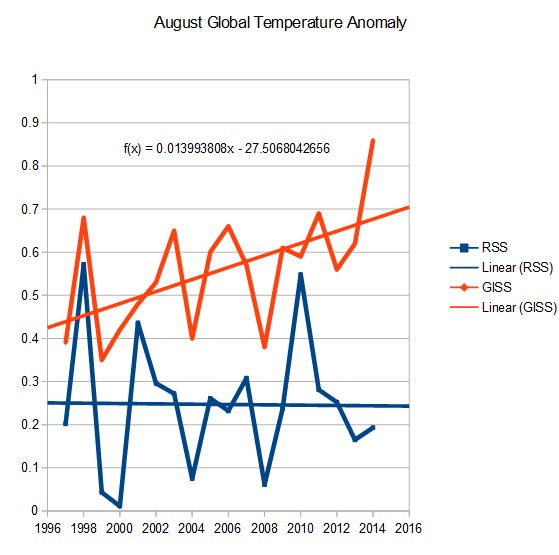 Gavin and crew accomplished this by obliterating the record for deviating from reality. 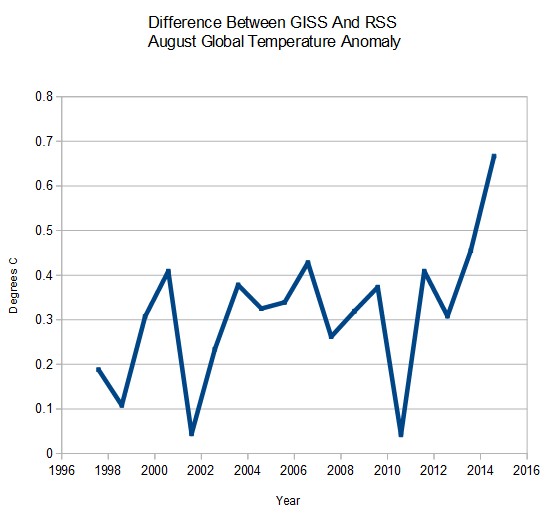 46 Responses to NASA Obliterates All Records For Fake Data [CORRECTED]