Who Is Steven Goddard?

My name is Tony Heller. I am a whistle blower. I am an independent thinker who is considered a heretic by the orthodoxy on both sides of the climate debate.

I live in Columbia, Maryland – an amazing city where I can ride my bicycle everywhere through the forest, and never need to get in a car.

I am a lifelong environmentalist. I testified at my first Congressional subcommittee hearing at age 15 in Kanab, Utah, in support of  a wilderness area – very close to the one which President Obama recently set aside. I worked to get the Clean Air Act passed. I worked as a volunteer wilderness ranger for two summers in the Cibola and Santa Fe National Forests in New Mexico. I worked on the Safety Analysis Report for DOE’s nuclear waste disposal site in New Mexico. I probably have the smallest electricity bill in Columbia, Maryland because I am very careful not to waste. I have never turned on my heat or air conditioning.

I have degrees in Geology and Electrical Engineering, and worked on the design team of many of the world’s most complex designs, including some which likely power your PC or Mac. I have worked as a contract software developer on climate and weather models for the US government.

I do not receive any funding other than small donations on my blog, which have worked out well below minimum wage. I have tried to obtain funding, but skeptics with money are terrified of political attacks directed by the White House and/or being targeted by the IRS. They openly state this to me.

My position on global warming:

The claims of 97% consensus are a massive lie. Only 52% of American Meteorological Society members believe that man is the primary contributor to global warming.

The radiative transfer models used by government climate scientists show that going up to 550 PPM or even 1000 PPM CO2 will make minimal difference to the radiative balance of the atmosphere. The knee of the CO2 curve is at about 30 PPM, and additional CO2 has little first order effect. This is because almost all radiation in the CO2 absorption spectra is already being absorbed by H2O or CO2 molecules. Adding more CO2 has minimal effect, because there is not much radiation left to be absorbed. (This is a bit of an oversimplification because of second order effects, but those are also small.) There is no indication from the radiative transfer models used by government scientists that additional CO2 will cause large amounts of heating.

The temperature record of both the US and the world has been massively altered since older versions, almost invariably to create the appearance of more warming, and in some cases to create warming where there is none.

The weather is not getting more severe. Since President Obama took office, there have been three US hurricane strikes – the fewest of any presidency. While Grover Cleveland was president in the 1880’s, the US was hit by twenty-six hurricanes. The US is currently experiencing its longest period since the 1860’s without a major (category 3-5) hurricane strike. The last one was Wilma in 2005.

Florida is currently experiencing the longest period on record without a hurricane strike. The US tornado count over the past two years has been the lowest in the modern record.

America’s worst forest fires occurred in 1871, when thousands of people burned to death in horrific firestorms around the Great Lakes – on the same day that Chicago burned to the ground.

Climate is cyclical and is always changing. People always imagine that they live in the worst of times, as this 1871 article from the Brisbane Courier states. 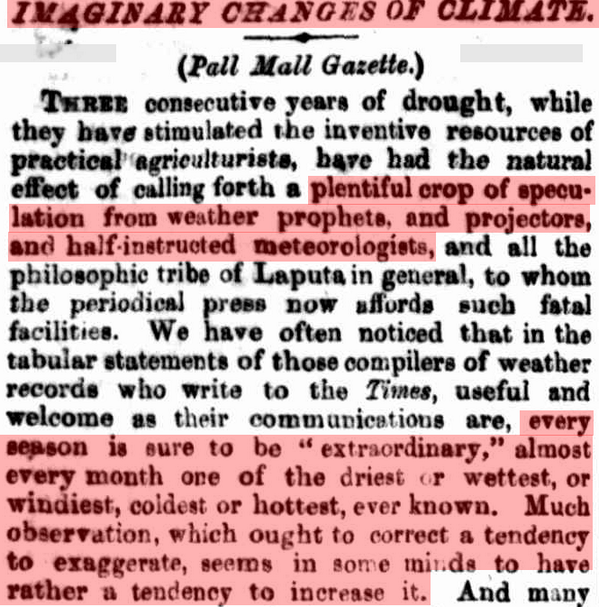 If you want to learn more about climate history, I have assembled a large collection of old newspaper articles about the weather below 350 PPM CO2. If you read through this, you will understand that lowering CO2 will not make the weather any better, or worse.

I am more than happy to debate anyone who feels up to the challenge, including the President of The United States. Science works through research and debate – not censorship, propaganda, faith, or intimidation.

204 Responses to Who Is Steven Goddard?