US Thermometer Readings Show Cooling Since 1895 – Before Adjustments

Posted on September 27, 2010 by stevengoddard

GISS US temperature data is based on the USHCN2 historical network, which adjusts recent thermometer readings upwards by a substantial amount before releasing the data to the public. The before/after blink comparator above shows that before adjustments, most of the US has seen cooling or neutral (blue) nighttime temperatures since 1895. (Some global warming eh?) But after adjustments, more than two thirds of the US shows warming (red) nighttime temperatures.

Same thing for daytime temperatures. Before adjustments, about three quarters of the US has cooled or remained the same (blue) since 1895. After adjustments, more than half of the country has warmed (red.)

The original USHCN diagram is shown below. Their colour scheme makes it a little harder to see what is going on. 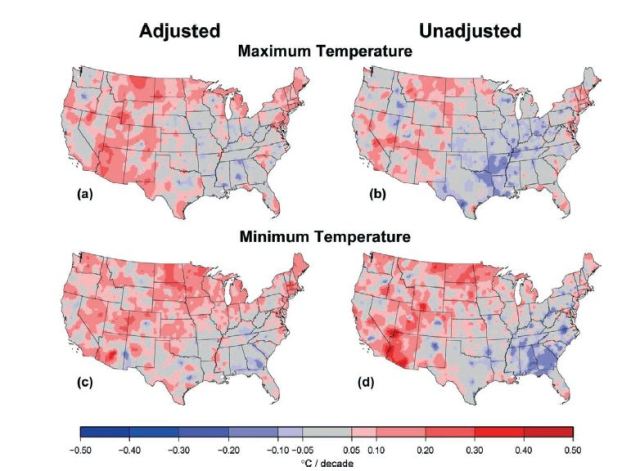 The normal procedure would be to display error bars, rather than firing off unmarked adjusted temperature graphs to the press and politicians.