Barack Obama will restore fiscal discipline to Washington:
Obama and Biden review the federal budget line by line and eliminate programs that don’t work or are unnecessary.

The Problem
Increasing Debt: Under President Bush, the federal debt has increased from $5.7 trillion to $8.8 trillion, an increase of more than 50 percent.

Barack Obama and Joe Biden’s Plan
Restore Fiscal Discipline to Washington
*Reinstate PAYGO Rules: Obama and Biden believe that a critical step in restoring fiscal discipline is enforcing pay-as-you-go (PAYGO) budgeting rules which require new spending commitments or tax changes to be paid for by cuts to other programs or new revenue.

Barack Obama and Joe Biden’s Record
* PAYGO: Obama voted in 2005, 2006, and 2007 to reinstate pay-as-you-go federal budget rules.
* Against Raising the Federal Debt Limit: In 2006, Obama voted against misguided Republican efforts to raise the statutory debt limit at the same time the Republicans were pushing through massive debt-financed tax cuts for the wealthy.

So how did he do with those promises? 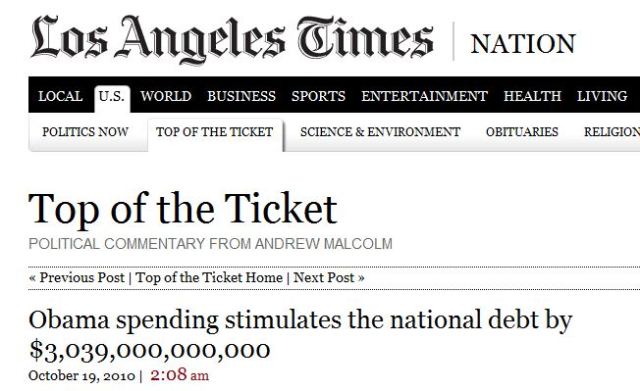