Richard Muller mis-represented himself to the Koch Brothers, took money from them to create a temperature record, and . (Update : Zeke says Mosher is not the chief scientist.)

Since the global warming pause started, Berserkley Earth has been diverging from satellite data at 3.3C/century. 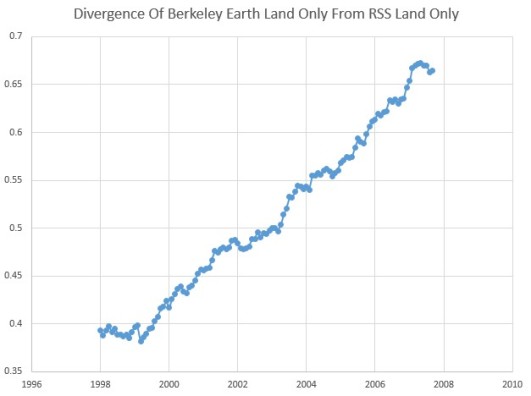 Muller was always a wild-eyed alarmist.

Let me be clear. My own reading of the literature and study of paleoclimate suggests strongly that carbon dioxide from burning of fossil fuels will prove to be the greatest pollutant of human history. It is likely to have severe and detrimental effects on global climate. I would love to believe that the results of Mann et al. are correct, and that the last few years have been the warmest in a millennium.

“It is ironic if some people treat me as a traitor, since I was never a skeptic“

Less than a year after announcing that he was never a skeptic, he announced that he was a converted skeptic.

The Conversion of a Climate-Change Skeptic
By RICHARD A. MULLER
Published: July 28, 2012

CALL me a converted skeptic.

The Conversion of a Climate-Change Skeptic – NYTimes.com

91 Responses to The Muller/Mosher Hockey Stick